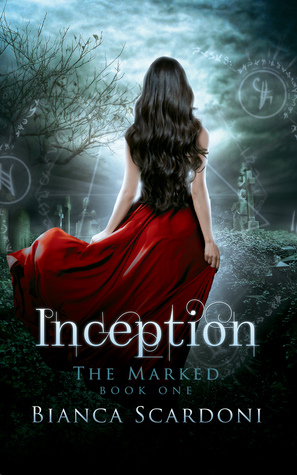 Be careful who you trust, for even the Devil was once an Angel.

My name is Jemma Blackburn, and I have a secret. I know vampires are real. I watched one murder my father eight months ago, and even though they tried to convince me it didn’t happen—that I’d lost touch with reality due to the trauma, I know what I saw was real.

Hollow Hills is now the place I call home. It was supposed to be my chance at a normal life. My chance to bury my secret and start over. But everyone around me is keeping their own secrets, whispering lies into my ears like promises, and one of them is about to turn my entire world upside down.

I’m the devil they fear and the angel they crave.
Only problem is, I don’t know it yet.

INCEPTION is the enthralling first installment in The Marked series. A YA paranormal romance full of atmosphere, supernatural adventure, and jaw-dropping twists that will keep you guessing until the very last page.

This was just sooooooooo, so bad. I assumed since it was so widely read that it was going to be okay, but then when it started to become apparent exactly how awful it was, I looked it up and realized that the author must be an advertising genius. She should be a publicist. Because the book itself was probably one of the most difficult to finish books that I’ve actually finished.

And I WILL give it that. I actually finished. There are many books on my DNF shelf.

Now the negative…
1. The characters didn’t stay true to their own personalities. They randomly said and did things that made no sense throughout the story. and it wasn’t about them evolving…it was about blatant inconsistency.
2. EVERY cliche was in this book. Repetitive, overused metaphors, fluffy descriptions, and forced emotional connections did not help already flowery writing.
3. The main character never does anything. She remains a weak, fearful, complaining, selfish twit throughout the book. The story keeps hinting about her changing, but it just never happens.
4. Everything is told rather than shown.
5. The other main character (the love interest) has zero consistent personality traits or likable attributes, but the protagonist loves him anyway….because she’s dumb.